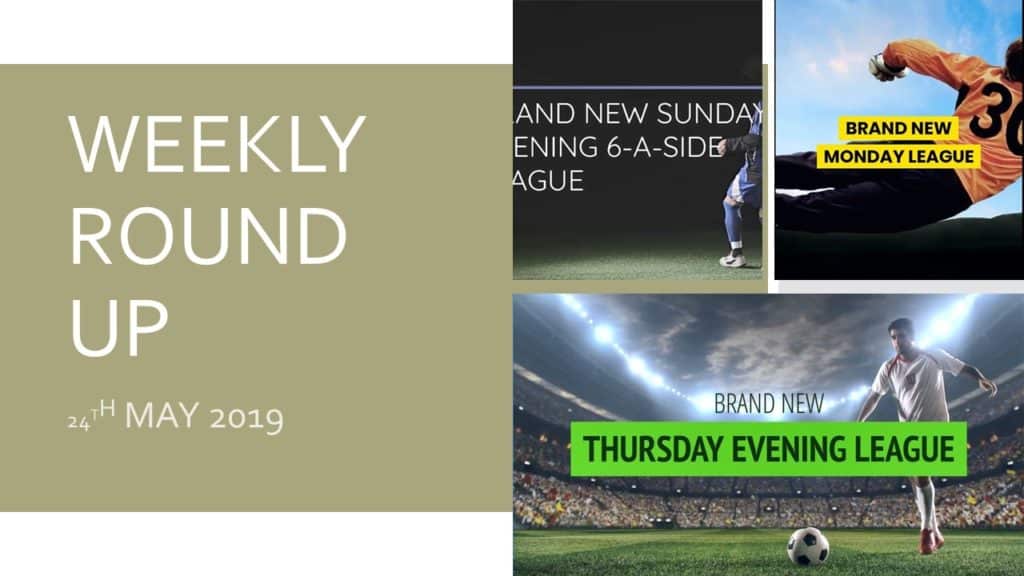 We got so close to getting our first Thursday night action on this week, but those pesky EU elections meant we couldn’t use the club this week. There’s always next week, and we’ll be doing another tournament NEXT THURSDAY, 30TH MAY at 8pm. The league will start as soon as we’ve got enough teams to get going, but we don’t think it will take long.

We’ve also got our NEW SUNDAY & MONDAY LEAGUES starting in the next few weeks, so there are plenty of options for anyone who is looking to get their team signed up.

For more information or to register your team, fill in a ‘Join A League’ form from the homepage.

Beercalona look to be on the brink of retaining their Sunday league title as they edged a cracking game 10-7 against Morning Glory, with Tykio Williams claiming 6 of their goals. The only team who can now catch them are Gangs Of Dwight Yorke, but that looks unlikley after they were surprisingly beaten 9-3 by a Duno side who are slowly piecing together a pretty decent team. Kaylon top scored for them with 5 as they look to secure a top division space for next season. On a full night for the top flight, Kipsta Cobras picked up their second win of the season, beating KR FC 6-4, with the new boys potentially looking at a season in the Championship when the new league kicks off next month. Jack Horgan and Kyle Clarke both scored doubles for Kipsta, while Jake Dean did likewise in reply for KR.

A strange night in the Championship as the top two were both comfortably beaten. FC AOTS first defeat of the season was finally inflicted by Bangers & Pash, who picked up an 8-3 win to mirror the scoreline from the previous time these two sides met. Rory Kelly and Lewis (just Lewis) grabbed three each on a night that AOTS will want to forget. Nice Buns B‘s only previous defeats this season had been against AOTS, but they conceded 5 second half goals without reply to lose 7-2 to Sevilla Lacatalent, with Tom Jackson scoring three of the Sevilla goals.

The title race is just about done and dusted in League One, as The McMuffin Men‘s 7-4 win over Inter Your Sister sees them go 6 points clear at the top. Rob Cresswell grabbed the three second half goals that secured the win in a keenly contested game. Polish Army lead the race for second place as they beat FC Stront Bakken 9-3, with Bania netting the bulk of the goals with 5. Team Tom have the games in hand but aren’t in the best of form, meaning that race could go to the wire, and they were beaten 5-2 by Step Brothers this week, with Josh Armitage scoring three.

We look to be on the brink of a true underdog story in the Sunday basement, as SK Six, who barely had a win to their name prior to the start of this season, are on the brink of the League Two title. They beat Pathetico Madrid 4-1 this week, with the goals spread out between 4 different players. Pathetico have been replaced in second place by Deportivo Lack Of Talent, who beat CA FC 5-3, a result which will make CA feel a little better after last weeks hammering! Rhys Moult scored 4, including the late goal that clinched the win, but they still sit 6 points behind SK.

In friendly action, The McMuffin’s stopped on to give Stockport Eagles a game, but the second game was a step too far for them as Eagles comfortably won 12-5 with Matt Kealy scoring 4 and Rob Piercy three.

Expected Toulouse picked up a thoroughly expected win this week to move to the brink of claiming the Monday Premiership title. There was no messing around as they raced into a 6-0 half time lead over Cheadle FC, and Joe Roche ended the match with 5 goals to his name and Waz Akram three as they eventually ran out 10-0 winners. Officially only Grand Street Wanderers can now catch Toulouse, as they came within minutes of a clean sheet of their own before conceding two late goals in a 5-2 win over Netsix & Chill, with Jay Bebbington’s three goals ending up being the difference between the sides.

Just the one Championship game took place this week as the season winds down, and it saw Ruby Kazan finish their season with 9 wins out of 10 as they beat Athletico Pathetico 12-6 in a game that had an end of season feel about it. Howie Thomas-Leech got 4 and Jordan Cunningham three as Kazan had what will presumably be their last comfortable game for a little while…

A couple of friendlies took place while we get the season finised off, and a new look Phantom Brazilians picked up an impressive 6-3 win over Nice Buns, with Daniel Clayton netting three times. The newly named duo of Ctrl Alt De Ligt (formerly Unprotected Cesc) and Trent The Fish (formerly Buff Daddy) also played out a fairly laid back fixture, with De Ligt comfortably winning 7-2 with just Fidelis Eberegbe helping himself to more than one goal.

THE NEW MONDAY LEAGUE STARTS ON 10TH JUNE, BUT IS CURRENTLY FULL. LOOK ELSEWHERE OR GET IN TOUCH TO JOIN THE WAITING LIST!

Things they are a changing at the top of the Tuesday league. We have new leaders this week as Gangsta’s Allardyce were surprisingly comfortable 12-1 winners over For Fuch’s Sake, who drop down to 5th but should still make the cut when the league splits. It was hat tricks all round for Callum Thompson, Adam Needham and David Crozier as Gangsta’s won a game we were quite pleased we didn’t film! The game we did film featured two teams with 100% records since joining as Speshull City took on Snorting Lisbon. This one was also surprisingly one sided as Josh Gittings 7 goals helped Snorting to a 13-5 win that sees them go second.

A much tighter game saw Reece Nuttall claim the MOTM award and a clean sheet as Leavemyarsealona beat Michu At De Gea Ba 3-0, while Barcabona made their Ballers debut and gave a good account of themselves before eventually losing 7-2 to Stroke Titty, who struck three late goals to confirm the win. Jay Willingham got three of their goals, and Chris Edge got two on his Ballers return after a long time away!

SPACES ARE AVAILABLE FOR AN IMMEDIATE START IN THE TUESDAY LEAGUE, WITH THE LEAGUE SET TO SPLIT IN A COUPLE OF WEEKS!

The big two in the Wednesday league have moved into the prime positions as we continue to catch up games after the early season disruption. New Team stay top but for a little while we were wondering if they were going to slip up for the second week in a row as they trailed FC Rhino Ket 3-1 approaching the interval. They drew themselves level by the break and scored 5 unanswered goals in the second period to clinch an 8-3 win, with all 6 of their players netting, including ‘keeper Jonny Taylor who was given a run out in the second period. Rob Elliott and Matt Brown also grabbed two apiece. Wellspring looked to be cruising to a comfortable victory over Out Of Shape FC as they went 5-0 up in the opening 20 minutes, but the Shapers are nothing if not spirited, and they technically ‘won’ the rest of the game but left with a 9-5 defeat. Lewis Arden and Mike Cocks both scored three for Wellspring, with Adam Grayda scoring two of Out Of Shape’s goals. At the other end of the table, Stockport Eagles and Exeter Gently had just one win between them so far this season. It was Eagles who had that win coming into this weeks game, but Exeter took early control, going 3-0 up in the opening 20 minutes. Kristian Igo’s second goal in the second half, and Adam Robison’s last minute strike meant they held on for a 5-3 win as Eagles put on a spirited second half fight back.

THE WEDNESDAY LEAGUE IS CURRENTLY FULL! THE TUESDAY AND THURSDAY LEAGUES ARE NOT…!

We could have been writing about our very first Thursday night of action this week, but the EU elections dictated that the club was a polling station and we weren’t allowed in… There’s always next week!

Man of the match